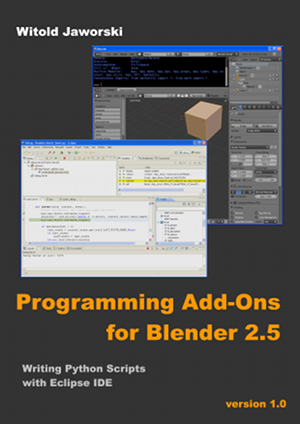 "Programming..." it is an e-book, published freely on Creative Commons license. I am showing there, how to adapt popular Open Source IDE - Eclipse - for developing Blender scripts. This is merely an introduction to this subject. It is intended for the readers familiar with Python and Blender 2.5 on the average level, at least. I am describing here the methods, used to learn Blender API and how to find the way to implement desired operation.

The first edition of this book was finished on July 2011. It counts 134 pages and contains about 300 pictures. (It is written around the pictures, like a "comic book").

This book is compatible with Blender 2.57 and its next versions. The presented information is still valid (when I am writing it, the current Blender version is 2.63). The example described here - a script that implements the "Bevel" command - in Blender 2.63 became slightly "academic", because this Blender version already contains the standard "Bevel" command. While reading this booklet, take a look at the updates / comments below.