Download the complete model, presented on the pictures below:

This aircraft was a "second chance" adaptation of P-36 (Curtiss Hawk 75) to the V12 liquid-cooled Allison V-1710 engine. They created it after the failure of more ambitious P-37 project. The P-37 had a turbo supercharger, which did not work well. P-40 used simple, one-stage mechanical supercharger, delivered by the Allison together with the engine. It was not as good, as the two-stage supercharger in British Merlin. Allison engineers created it as an additional stage after the turbo supercharger. Lockheed used, with a success, such configuration in P-38 Lightning. Using this device alone, Allison engine in P-40 was quickly losing its power above 15000 ft.

When we treat the P-36 and P-40 as different stages of the same development, this fighter has the same age as Messerschmitt Bf 109. In 1936 the P-36 had advantage (because of more powerful engine and larger wing area) over the Bf-109, versions from A to D. Introduced in 1939 P-40 (the first version did not have any letter) had the performance comparable to the Bf-109E, created in the same time. However, in further development, P-40 was “loaded” with additional guns (one per each wing), doubled the amount of the 12.7 ammo in the fuselage (up to 35s of continuous fire). They safeguarded cockpit, placing the armor plates on its front and back bulkheads. All the fuel tanks were covered by self-sealing protection layer. (P-40B had lighter, external cover, and its tanks had the overall capacity of 160 US gallons. P-40C had better, and heavier, internal cover. It was thick, and reduced the overall fuel capacity. P-40C could take in its internal tanks 130 US gallons, only).

Comparing to the P-40, gross weight of P-40B increased by 8%, and P-40C - by 10%. It decreased the max. speed (from 357 to 345 mph), and the initial climbing (from 3080 ft/min to 2690 ft/min). Concluding, the endurance to the battle damage and the pilot’s safety was increased. From the other side, it is not the way to win a clash in the air… But from another side, all US fighter designs received in that time better passive protection and increased firepower, at the cost of their performance. (Look at the changes between F4F-3 and F4F-4 Wildcat variants, for example). It looks like deliberated attempt to save as much, as possible of inexperienced fighter pilots. These design changes increased their chances to return from the first fights…

As every design, P-40 was a compromise, which assumptions had roots in 1935. In contrast to Bf-109, it had to take more useful load — mainly the fuel, because the US machines always have longer range. In effect, P-40 was bigger and heavier than Bf-109E. Both fighters had engines of similar power. But Bf-109 was designed as cheap and minimalistic "Blitzkrieg tool". Its aerodynamic qualities were sacrificed to the technological advantages – so the top speed of both machines was similar! (It was corrected in next version, Bf-109F. This fighter was by 30 mph faster than P-40C, at 15 000ft). Messerschmitt Bf-109F was also much lighter, and had much better climbing: 3650 ft/min. P-40 had better agility, especially at higher speeds. Because of its sturdy, stiff wings, Curtiss had “light” and effective ailerons. It could roll (it also means to enter the turn) at least 50% faster than the German fighter (above 320 mph this difference was even much greater). It also outclassed (at speeds above 300 mph) Mitsubishi Zero — it had serious problem with their ailerons, because of minimal margin of structural strength. The success, at the beginning of the war, Japanese fighters gained because of their tremendous range and the quality of their pilots.

As you can see, the P-40 had its weak and strong points. Each design has them. To make it effective, you have to invent and use appropriate tactics. AVG’s mercenaries succeeded in it, because of accurate assumptions, made by Clarie Chennault. USAAF officers had to reinvent this “hit and run” method, which cost life of many pilots.

Digging in the sources, I have found many positive pilot’s recollections about this machine. For example – an AVG veteran, Eric Shilling, in the middle of nineties explained the P-40’s advantages on the usenet forum. (He was vigorous old man, in that time. I found his posts and threads in the Internet archives).

Another example is the Russian Navy pilot, Nikolai Glodnikov (see the interview). He had already made many combat flights on I-16 and Hurricane, when entered for the first time into P-40’s cockpit. After few training flights, he concluded to himself: "They have given me a modern fighter, at last!". He served in a good unit (2nd GIAP). They always try to adapt the tactics to qualities of their actual equipment. Golodnikov recalls, that they removed the guns from the wings of his P-40C (about 200 pound less), and fly at high rpm regimes of the engine. (Probably pilots from 2nd GIAP often used the Allison’s "military mode". In this regime, it gave about 10-15% more power, but became unusable after 20-30 intensive combat flights. Nevertheless, the machine used in this way had better performance, especially the climbing (also because of the zoom effect). Average "lifespan" of typical VVS fighter was in that time about 40 combat flights, so it was a quite rational approach. 2nd GIAP had fewer losses, than other regiments. At the end, when they were converted into Aircobras, there were still some P-40 without engines, on their airfield.

More on this subject you can find, for example, in Joe Baugher's article .

I have placed this “white 75” model (P-40 from AVG) into the photo of ground airfield (to describe, how to do it, in the book):

Another picture shows two machines from 47th PS, which managed to get airborne from Haleiva airfield strip, on 7th December 1941. They are depicted just a few second after leaving the ground, while retracting their l anding gear. (To close it, you had to help the hydraulic system with the manual pump, in the P-40! It retracted them separately, one after another, in about 20 seconds...). In that time, these airplanes could get some altitude and fly over Pearl Harbor…

47th PS avoided the direct attack, on the Sunday, 7th December 1941. A few days earlier, they were relocated for the gunnery training to provisional Haleiva airstrip, at the north of Oahu island. Two pilots from this unit – George Welch and Kenneth Taylor – managed to return to the airfield and get airborne. (All flying staff had left this field base for the weekend, and Japanese fighters could “hunt” this day even the cars on the roads!). Both survived this day, destroying some Val diving bombers. They fly two times, that day. On the second time, they were caught by the Vals just over the Wheeler Field runway. They downed the Taylor’s machine, and its pilot got hurt. Welch shot down the Japanese airplane that attacked Taylor, and fly again over the port.
Welch survived whole war. He was killed later, in an accident with F-100 supersonic fighter prototype.

I would like to show you some details, which are not visible on the general views. I think, that you will see better the quality of this model.

The creation of landing gear I have started with the simplest assembly: the tail wheel: 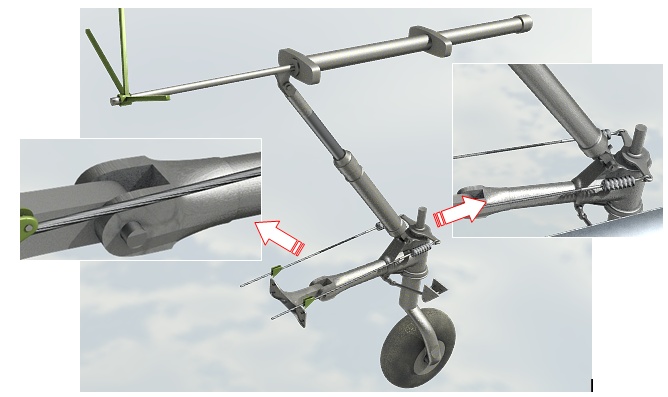 Notice the texture of steel cords (on the left) and spring (on the right). I have modeled both as simple tubes. Whole effect is obtained by appropriate procedural textures

Next picture shows retracting of the tail wheel. This was a reliable mechanism, in P-40. (In many other fighters of that time it was not. For example, ground crew often fixed the unreliable retracted tail wheel in Bf-109Gs. It reduced its top speed by about 10-15 mph). This P-40 assembly worked properly, because it was relatively large, had solid actuator with long arm, and plenty of space in the fuselage. The mud and water splashes, frozen on the higher altitudes, had less chance to block it.

When the tail wheel was ready, I have created the main landing gear: 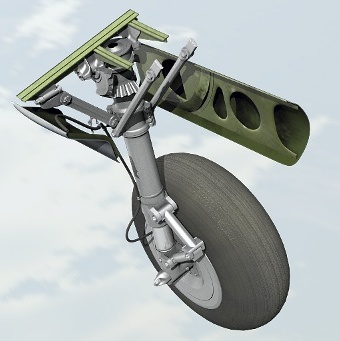 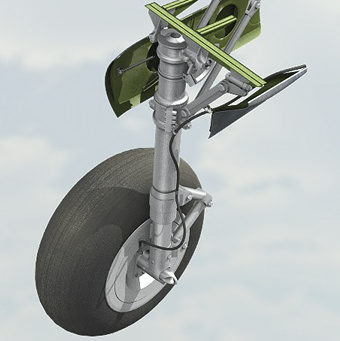 Like all moveable parts in this model, it is controlled by an universal Blender Add-on (Handle Panel). It allows me to retract whole landing gear just with a single scrollbar:

After the undercarriage, it was time for the cockpit. I started with the windscreen inner details, and basic equipment, like pilot’s seat and bases (“boxes”) for all other inner stuff: 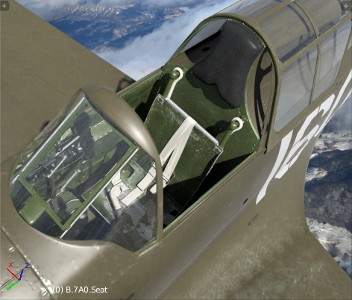 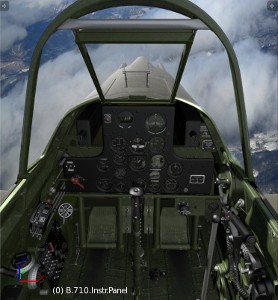 Then I have filled the inner space of the cockpit with details: 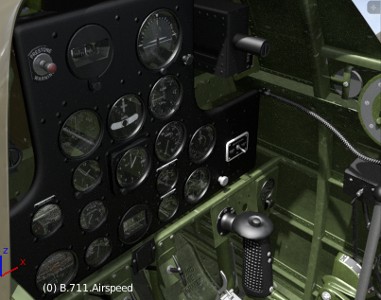 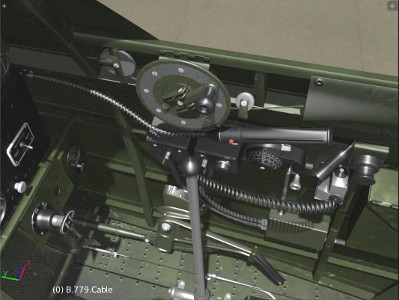 Usually, some of them have complicated shapes. In fact, the details of the cockpit are limited by one key factor: your patience. From the pilot’s seat it looks not as good, as in the best flight simulators. But such views are not the main goal. It looks better from the outside

Finally I created the pilot figure. Its presence definitely brings some life to the cockpit: 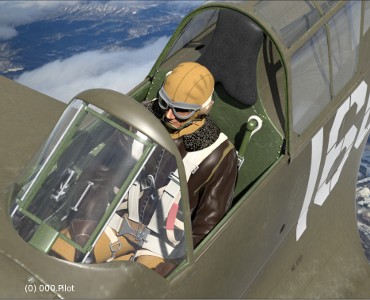 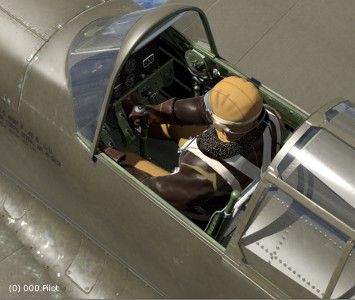