I created all the work presented in this site on a typical laptop, using three free programs: , , and .

However, to build any model - from wood, paper or plastic - you need some motivation. That's why I placed it at the beginning of this section:

Building a computer model is comparable to building a classic model "from scratch". Both require the basic virtues of every modeler: patience and dedication to details. Of course, it is much easier to build it from the virtual "material", and to obtain the real precision in such a model. (See the detailed discussion about advantages and disadvantages of computer modeling).

I think that the computer models are a new branch of the fine scale modeling. I would especially like to present it to the traditional modelers, who make airplanes from paper printouts or plastic kits.

There are some places on the Internet, where you can find interesting 3D aircraft models. To find some inspiration, look at these sites:

Nothing special - to build my P-40B model (700 thousand faces) I used an office standard laptop: with Intel i5 dual-core 2.4 GHz CPU (520M), 2GB RAM, the standard laptop display (1366x768px) and the low-end integrated Intel Graphics chip (it uses part of the system RAM for the image processing). In general, you will build your models in the Blender 3D software, thus its requirements determine the hardware you need. See the table below:

Note that this table does not mention the hard disk space. The reason is simple: all three programs are relatively small. (At this moment - April 2015 - the full Blender installation uses 270 MB of disk space. The GIMP and Inkscape require similar amounts).

Currently I use a newer "economy" laptop: with Intel i5 dual-core 2.4 GHz CPU (3230M), 8GB RAM, and nVidia GeForce GT 740M GPU (2GB of internal RAM) connected to a 24-inch (1920x1080px) external display. The nVidia CUDA architecture of the graphics card allows me to render the final pictures two times faster than on the CPU.

I think that the free Open Source software is the best solution for the hobbyists like us. We have a good luck that the capabilities of the basic program - Blender 3D - are comparable to the popular commercial products. If you are interesting, why I propose just the programs listed below, see the description of selection process I did in 2006. 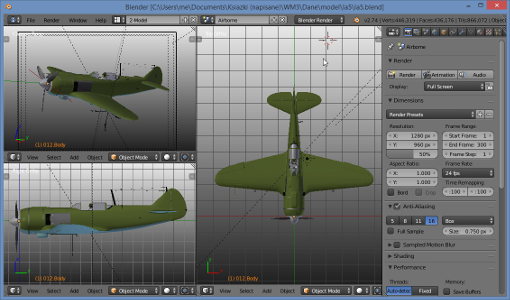 Blender is the main program, used for the modeling, texturing, posing, and rendering. You can download it from http://www.blender.org. Comparing to its commercial counterparts - 3DMax or Maya - it uses a relatively small amount of RAM and disk space. Blender is available for various operating system: Windows, Linux, OSX (Mac). It has no external dependencies. That's why you can "install" Blender for Windows not using its installer (although there is one). Just unzip its files into a directory, and run whole program from this location. In this way you can have many Blender versions, side by side, in separate folders. 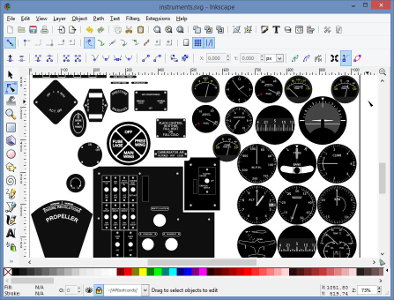 Inkscape is a vector-based drawing program, which I have used for all “geometric” textures: bumpmaps of the rivets and clefts, national marks, tactical numbers, and so on. All of them are created as vector entities, and saved in Inkscape’s .svg file. The actual version of the drawing is exported as raster (*.png) image, and used as a texture by Blender. Usually I have run both programs in parallel: when Inkscape overwrites the PNG file, I reload it into Blender.

You can download this program from http://www.inkscape.org. Versions of Inkscape, that I have used: from 0.44 to 0.48 (I cannot see, why they have mark it with such low version number – this program seems to be rather complete) 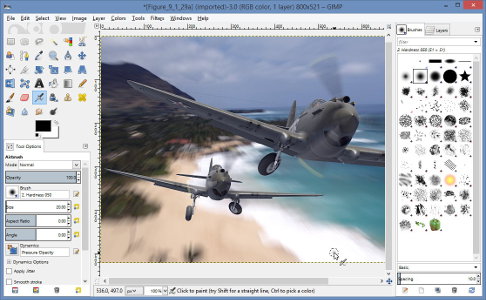 GIMP is the tool used for all non-vector textures, and for all general processing of raster images. (For example – camouflage, the dirt accumulated on the real aircraft). It is one of the oldest GPL programs, and one of the most popular. Its functionality resembles moreless the Photoshop.

You can download this program from http://www.gimp.org. Versions of GIMP, that I have used: from 2.3 to 2.8 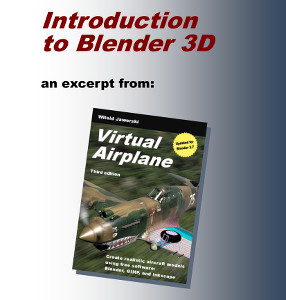 As every general 3D modeling and animation software, Blender is a quite complex program. To start using it, familiarize yourself with its user interface, navigation in the 3D space and the basic operations (moving, rotating, and scaling the scene objects). Download this free introduction and one of the free models from this site, and play with it for a while. 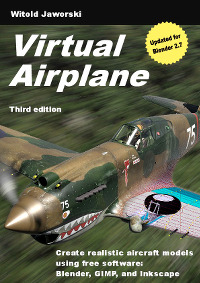 Then you can learn more, using Blender online manual and vast video tutorial resources (like these on Blender Guru or Blender Cookie portals). If you prefer a more "condensed" information, you can buy some books about Blender. Usually they discuss just one of its aspects - modeling, materials, animation, or rendering. If their authors try to describe a complete process, they use a simplified examples. To find everything you need in a single book, see this the complete guide ("Virtual Airplane"). I describe there the real case of the P-40B model, from the beginning to the end, in a step-by-step manner. "Virtual Airplane" is accompanied by over 60 example Blender source files, textures and useful plugins. (This publication is probably the thickest book about Blender and aircraft models - 1339 pages, 2440 illustrations!)